Museum Open Monday to Saturday 10 am to 5 pm
Virtual TourBecome a Member
Welcome to
Psychiatry: An Industry of Death Museum
Click here for virtual tour

“The statistics and facts were astonishing.  It’s illegal to kidnap and chain someone in your basement, but okay to strip them from their home and lock them, unwillingly, in a mental institution”

“As a sergeant for 26 years, and doing 5150 [involuntary] holds I think police agencies would benefit definitely from this information"

"This [Museum] enlightened me on the barbarianism of psychiatry & it's disciplines! It's INFLUENCE has to be ATTENUATED"!

Located within CCHR’s international headquarters in Hollywood, California, this state-of-the-art museum documents how psychiatry is an industry driven by profit, its pretended help often resulting in death.

Opened in December 2005 by Citizens Commission On Human Rights International, the Psychiatry: An Industry of Death Museum is dedicated to exposing an industry driven entirely by profit whose purported therapeutic benefits have often resulted in death. The museum aims not only to educate and inform but to bring practical guidance for lawmakers, doctors, human rights advocates and private citizens to take action in their own sphere and thereby force psychiatry to account for its crimes and abuses.

This entirely self-guided tour includes documentaries, artifacts and displays of psychiatry’s most harmful treatment devices. It is the definitive resource on historical and contemporary psychiatric theories and practices.

Thanks to the rarity and wide variety of information provided, the museum is a beacon for lawmakers, doctors, human rights advocates, healthcare professionals, students and citizens interested or working in the areas of psychiatric abuses, over-medication, and general mental health.

You can experience our museum by visiting our virtual tour here>>

The museum is a multi-media tour that showcases 18 different exhibits which include rare photos, artifacts and mini-documentaries featuring more than 150 healthcare professionals, attorneys, professors, and human rights advocates. The museum aims not only to educate and inform, but to bring practical guidance for lawmakers, doctors, human rights advocates and private citizens to take action in their own sphere, and thereby eliminate psychiatric abuses committed under the guise of mental health. 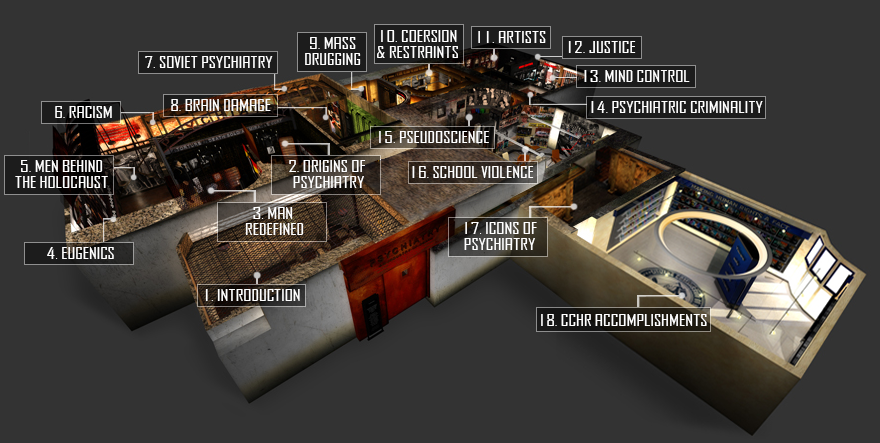 Click on the numbers below to learn more about the different sections of the museum.

Stepping across the threshold, visitors are introduced to this state-of-the-art museum which documents psychiatry as an industry driven by profit, its pretended help often resulting in death.

From its beginnings in the 1500s, psychiatrists have used torture, restraining and isolating people with mental problems as a form of so-called “treatment.” Here you will see the inhumane practices used by psychiatrists to cash in on human misery.

In this section you will learn about how psychologists declared that the study of the soul is a “waste of energy” and that Man was nothing more than an animal without a soul and how this led them to believe that Man could be manipulated as easily as a dog could be trained to salivate at the sound of a bell.

Here you will find a brief explanation of the origins of Eugenics which literally means good stock. Psychologists believed that breeding of the “fittest” could bring about a superior race and that many were biologically unfit and worthy only of “a quick death.” These are the origins of racism and the justification for the discrimination of minority groups.

The Men Behind The Holocaust

The Nazis killed millions. Their justification was psychiatry and psychology’s theory of eugenics—that certain people were inferior and should be exterminated and their kind bred out of the race. Here you will look at a different perspective of the Holocaust and learn about the men behind Hitler’s ideologies that lead to one of the greatest genocides in human history.

From segregation and discrimination in South Africa to the Ku Klux Klan and experiments on minorities in the United States, the most brutal racists were inspired by eugenics which justified injustice, inhumanity and denial of human dignity to millions. Here we have the reason behind racism in our society exposed and the architects of it all.

In this section you will learn about how psychiatry conspired with those in power in Communist Russia to strip the rights of political dissidents and to define their “search for justice” as a mental disorder to justify their imprisonment.

If an ice pick were accidentally shoved behind someone’s eyeballs, or they were jolted by 120 to 240 volts, leaving them convulsing and barely breathing, they would be rushed to a hospital. To a psychiatrist, these acts are “treatment.” Here you will learn about the most violent procedures created by psychiatrists, some of which are still used today on patients as young as a few months old.

Psychiatric drugs are not designed to cure, but to suppress symptoms and physically damage the person taking them. Here we will take you behind the curtain of one of the most lucrative and destructive industries and will show you how psychiatrists used this new “miracle” treatment to build a multi-billion dollar industry.

In the last 40 years, more Americans have died in psychiatric institutions than American soldiers in battle in all the wars since 1776. This section showcases how, instead of receiving comfort and proper care, patients are detained against their will, restrained, drugged, sexually abused, beaten, denied medical care, experimented upon and locked up in isolation.

At the beginning of the 20th century, psychiatry and psychology infiltrated Hollywood, redefining creativity as a form of neurosis. Here you will learn how many great artists have been lured into the dangerous clutches of psychiatrists and paid with their sanity and sometimes with their lives.

Soaring crime rates, overcrowded prisons, courtrooms clogged with repeat offenders and the erosion of justice—these situations exemplify the destructive influence of psychiatry’s agenda. This section shows you what is happening behind the curtains.

Since the 1960’s, there has been an explosion of terrorist violence. Investigation reveals the often hidden influence of psychiatric treatment or psychological indoctrination behind the terror. Here you will learn how psychiatrists have been working with military and terrorist groups and conducted lethal brainwashing experiments on unwitting American citizens.

There is only one passion that truly motivates the psychiatric industry—money. It is not by coincidence that the practitioners of this profit-motivated industry have a high number of criminal convictions as compared to the other sectors of the healthcare professions. Fraud, assault, violence — these are just some of the crimes exposed in this section of an industry strewn with criminals.

The principal reason for the creation of the Diagnostic and Statistical Manual of Mental Disorders was to provide psychiatry with a system of compensation for insurance billing similar to that used by mainstream medicine. Here you will see how, despite the DSM’s complete lack of scientific credentials, psychiatry in the U.S. alone rakes in over $100 billion a year in funding for “treatment” of DSM-disorders. Learn too about the relationship between psychotropic drugs and the cascade of violence in our schools today, and what lies behind it.

Psychiatrists and psychologists have invaded our once successful education systems and converted them into behavioral laboratories. It is a lucrative business.
Learn how psychiatrists have turned schools into a $2.6 billion industry by diagnosing children with so-called mental disorders that cannot be medically or scientifically proven to exist.

Psychiatry has pushed its agenda of control, power and domination onto an unsuspecting society for over 60 years, infesting the fields of law enforcement, education, medicine, politics and many others. This section exposes the depths of their plans.

Psychiatrists act above the law—locking people up with no trial, stripping them of their human rights while enforcing unwanted treatments. Here you will learn about how The Citizens Commission on Human Rights has exposed, fought and won against psychiatry’s violations for over 50 years and what you can do to help.

Enter Museum
Click and hold to move around the museum

WARNING: GRAPHIC MATERIAL. NO ONE UNDER 18 SHOULD ENTER THE VIRTUAL TOUR WITHOUT AN ADULT.

The Marketing of Madness Education Package is the ultimate resource for educating others on the dangerous effects of psychotropic drugs, and the multibillion-dollar psychiatric-pharmaceutical partnership now dominating the field of mental health.

If you are an educator or professional who holds seminars or who lectures to colleagues, students or community groups on these issues, click below to get your copy.

Therapy or Torture: The Truth About Electroshock

This new shocking documentary exposes the $5.4 billion ECT business, its history, practitioners and devastating results are revealed in graphic detail.

You can request a private or group showing of the documentary by contacting us at museum@cchr.org or you can Watch the Documentary Online by clicking here.

The information provided to the students and myself was so invaluable and directly applied to their community/public health objectives.It was a wonderful learning opportunity for them to gain so much knowledge which they will carry on throughout their careers.
‍- D.W., Advanced Practice Registered Nurse, Family Nurse Practitioner, Public Health Educator

left a stamp in our memories

The tour was very informative and stimulating in many ways. The students were able to see the historical perspective of psychiatric care and the progress with improvements we have made throughout the years. Multiple discussions occurred afterwards about the benefits of advocating for vulnerable groups, and the variables that may harm them. We, as healthcare providers are to do no harm, want to heal the soul and the psyche with care and compassion. Your kind and informative presentations were much appreciated and met our curricular learning objectives. It will be one of the tours that left a stamp in our memories teaching us to help the vulnerable and respect humans regardless of race or age.
‍R.D.T. Doctor of Nursing Practice, AssistantDirector of Nursing

“I have been bringing my nursing students to the Museum since the beginning of 2006. In a simple calculation, I have brought to the Museum about a thousand future nurses. I do it because I want to expose those, who will become the patient advocate, to the reality of psychiatric abuse. When I evaluate and reflect on a visit to the Museum, I see that some students enjoyed it, some were terrified to explore the information that would forever change their opinions, their views on so many things. No one would leave indifferent. The eye-opening experience turned many of them into the fearless warriors for the noble cause. This experience broadens their horizons. They come again, bringing along their relatives, friends, making this information like an avalanche that touches more and more hearts, fills more and more minds, changes more and more lives.” – O.K. Director of Nursing & NurseEducator

Why Become a Member?

As a non-profit mental health watchdog, CCHR relies on memberships and donations in order to continue its mission. By becoming a member you become part of the largest movement for mental health reform in the world. Join the group which has helped enact more than 180 laws protecting citizens from abusive mental health practices.

Your membership helps us continue to create our free public awareness services, such as our one-of-a-kind psychiatric drug side effects search engine, videos, and educational materials, in addition to increasing the ranks of our membership base, which in turn helps us garner more support from legislators and opinion leaders around the world.

Its mission is to eradicate abuses committed under the guise of mental health and enact patient and consumer protections. As such, CCHR receives reports from individuals who have been abused after they sought help from psychiatrists and/or psychologists and were falsely diagnosed and forced to undergo unwanted and harmful psychiatric treatments, such as psychiatric drugs which are documented to cause serious side effects, involuntary commitment, or electroshock.

If you or anyone you know has been harmed or damaged by psychiatric or mental health “treatment,” click the button below.